The Libbey House is now OPEN for rentals and we are currently taking reservations for special events at the House following the Governor’s COVID-19 restrictions for event venues.  We are sorry for this inconvenience but this is to keep everyone safe and limit exposure as much as possible.  Due to this evolving health situation, we will continue to monitor the situation, and the measures we take may change as necessary.

Thank you for your understanding during these unique and unprecedented times. Please look forward to our Spring Mother’s Day Luncheon Tea and other summer and fall activities.

Stay safe. We hope to see you soon.

The Edward D. Libbey House is a National Historic Landmark at 2008 Scottwood Avenue in Toledo, Ohio. Built in 1895, it was the Home Edward Libbey (1854-1925), a businessman who revolutionized the glassmaking industry in the United States. It was declared a National Historic Landmark in 1983. It is now owned by a nonprofit public charity dedicated to its preservation.

Edward Drummond Libbey came to Toledo in 1888 from Boston, where he and his family owned the New England Glass Company. Mr. Libbey decided to move the company west to take advantage of Toledo’s plentiful natural gas and sand, both important resources for a glass manufacturer — as well as economical building sites and an enthusiastic labor force. Northwest Ohio welcomed Libbey with open arms. In fact, The Blade of August 17, 1988 wrote, “All Toledo welcomes you to the future glass center of the world!” In 1892, after firmly establishing the glass company in Toledo, Libbey changed the name of the business to The Libbey Glass Company.

In 1890, Edward Drummond Libbey married Florence Scott. They commissioned architect David L. Stine to design their home that was built at 2008 Scottwood Avenue in 1895. Today, this beautiful shingle and colonial revival style mansion is a major structure of Toledo’s Historic Old West End neighborhood.  Once restored, this National Historic Landmark will serve as a unique venue for the Libbey House Foundation to offer events and receptions on the first floor, and an education and conference center on the second and third floors. 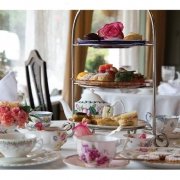