Libbey Goes To The Fair 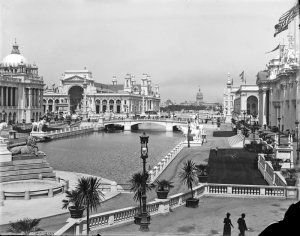 The World’s Columbian Exposition, also known as the Chicago World’s Fair and Chicago Columbian Exposition, was an international exposition held in Chicago, Illinois, United States, from May 1 to October 30, 1893 to commemorate the 400th anniversary of Christopher Columbus’s landing in the New World in 1492.  Over 27,300,000 visitors attended the fair over the six months it was held, including representation from 46 countries.  The buildings of the fair were primarily designed in the neoclassical architecture style. Architect Daniel H. Burnham, the exposition’s director of works, combined architecture and sculpture to define this fair just as engineering defined the 1889 Paris Universal Exposition. The Court of Honor was also referred to as “The White City”. 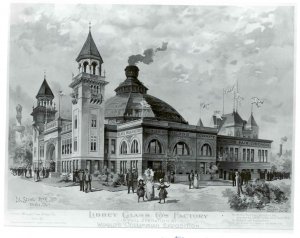 Edward Drummond Libbey believed that to be successful, the Libbey Glass Company needed an international reputation. Libbey felt the upcoming World’s Columbian Exposition held in Chicago would make a perfect stage to achieve this objective.

He secured exclusive rights as the only American glass firm represented if he were to build a fully operating glass factory at the Exposition. He also negotiated that the Libbey Glass pavilion would be constructed on the Midway Plaisance, a mile-long avenue where thousands of visitors would see the Libbey Glass pavilion daily. He hired a well-known Toledo architect, David L. Stine, to design a building that was both a working glass factory that included a 10-pot furnace, and a pavilion able to hold 2,000 people. Visitors could actually watch glassware being created by 40 hand selected glass blowers Libbey recruited from his glass plant in Toledo, Ohio.

Unlike many of the exhibitors at the Exposition, Libbey charged to enter his pavilion. It originally cost a dime in order to observe his workers hand-blowing and cutting glass, but after the factory proved to be very popular, Libbey raised the price to a quarter. In return for the price of admission, he made it possible for visitors to apply the cost toward the purchase of glass souvenirs, getting his products in the hands of the wealthy visitors who could make the trip to Chicago.  The glass souvenirs included paperweights depicting scenes from the exposition, glass slippers, cups and saucers, and an unusual salt shaker in the shape of an egg. Other subjects were the Liberty Bell, a glass ax that featured the face of George Washington, a hand bell, and spun glass items such as dolls and ties. 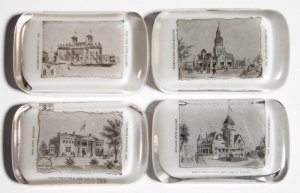 Over two million people had visited the Libbey Glass Pavilion when the Chicago Columbian Exhibition closed in October, with an estimated 20 box cars worth of glass sold. As predicted by Libbey, his new company received significant national media coverage. The name “Libbey” had become synonymous with fine glassware, which enabled the company to place their fine cut glass products at some of the most prestigious stores throughout America, including Tiffany’s in New York City. Libbey’s American Brilliant Cut Glass products would become sought after for decades after the exhibition. 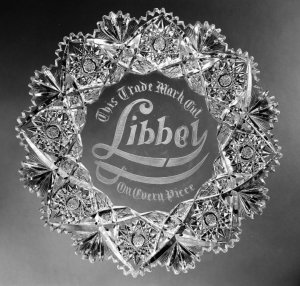 Libbey’s glass factory was one of the most popular attractions. The Crockery and Glass Journal reported: The factory at the Fair is a model of completeness…. Yesterday a new feature was added to the exhibit which delighted the visitors greatly. Spectators for a small sum each were allowed to ‘blow’ and the funny results … kept the great crowds in excellent humor. The cutters and weavers attract most general attention….  The weavers were making fabric from glass threads.  Libbey included a glass dress in its display as well as neckties and dolls of fiberglass as souvenirs. 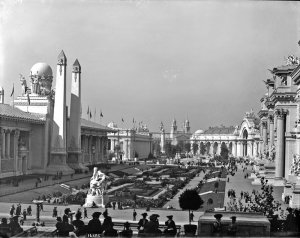 The Louisiana Purchase Exposition, informally known as the St. Louis World’s Fair, was an international exposition held in St. Louis, Missouri, United States, from April 30 to December 1, 1904 to celebrate the centennial of the 1803 Louisiana Purchase.  World Fairs are known for showcasing new technology, innovation, and scientific discoveries to the average person. Over 19 million visitors attended the fair over the seven months it was held. 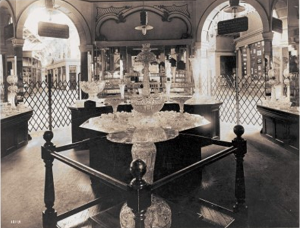 With the success of the 1893 World’s fair, Libbey produced a display for the 1904 World’s fair, although it did not include a working  glass factory or demonstrations.  The exhibit corresponded with the height of popularity for Libbey’s brilliant cut glass.

Edward Drummond Libbey fascinated visitors at the St. Louis World’s Fair with and amazing collection of brilliant cut glass from his company.  The centerpiece of which was a massive 134-pound cut glass punch bowl, crafted out of fine lead crystal of extremely high purity, which served as the centerpiece of the Libbey Glass Company’s mirrored display in the 14-acre Palace of Varied Industries. This masterpiece was declared to be the largest piece of cut glass ever produced. An article about the punch bowl appeared in Scientific American magazine that year.

At the time, the Libbey Glass Company of Toledo, Ohio operated the largest cut glass factory in the world, employing some 200 glassblowers and another 200 glass cutters and engravers. 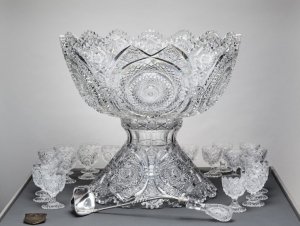 Surrounded by an astounding collection of over 1,800 pieces of tableware and decorative objects, the punch bowl exhibited the company’s superior craftsmanship. The Punch Bowl set consisted of a grand bowl having a capacity of 15 gallons, 24 matching punch cups, and a sterling silver ladle by St. Louis-based Mermod & Jaccard Jewelry Co. with matching cut glass handle.  The punch bowl, considered to be the largest single cut glass object ever made, was cut by two of Libbey’s top glasscutters, John Rufus Denman and Patrick W. Walker, at the Libbey Glass Company’s Toledo factory.

The judges at the fair awarded Libbey Glass the Grand Prize Medal for cut glass for the Punch Bowl set.  To make brilliant cut glass, craftsmen would take a hand-blown leaded glass blank and use special cutting wheels to carve deep patterns into the surface of the glass while looking through the glass. The deep facets would refract light and create a brilliant shimmering effect. Numerous fleur-de-lis can be seen across the punch bowl, in part to commemorate the national flower of France from which President Thomas Jefferson purchased the Louisiana Territory.