You are here: Home / History – The Libbeys

The Libbeys and Their Legacy 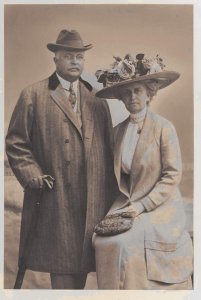 Toledo glass industrialist, innovator, and Museum benefactor Edward Drummond Libbey is regarded as the father of the glass industry in Toledo, Ohio, where he opened the W. Libbey and Son Company (later the Libbey Glass Company) in 1888.  Born in Boston in April, 1854, Edward was the only son of William and Julia (Miller) Libbey.  His father was head of the New England Glass Company.  In 1874, Edward learned the glass trade from his father, eventually taking over the company on his father’s death in 1883.  Edward Drummond Libbey relocated the former New England Glass Company to Toledo in 1888 because of lower production costs due to inexpensive natural gas, sand with high silica content, and a transportation network of ships and rail.

Florence Scott was the daughter of Maurice and Mary Jane (Tallant) Scott, born into one of Toledo’s most influential and wealthy families.  Florence’s grandfather was Jesup Scott, who was founder of the University of Toledo, an early editor of the Toledo Blade, and major Toledo benefactor. Florence was well educated, traveled extensively, and was a lover of beautiful things. After a chance encounter, they fell in love and were married on June 24, 1890. Together, with his wife Florence Scott Libbey, they were fashionable members of Toledo society at the turn of the 19th century and enabled Toledo to prosper economically and culturally.  She encouraged her husband to establish an art museum in Toledo for the enrichment of the community through art. 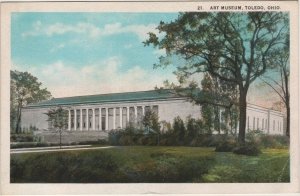 In 1901, the Toledo Museum of Art was founded by a group of seven charter members including Mr. Libbey.  The museum’s building sits on the property of Mrs. Libbey’s father’s estate, given by the Libbeys for this purpose.  In order to encourage community support, Libbey encouraged Toledoans to pledge money toward the new building.  With the help of the director of the Museum, George Stevens, $50,000 was pledged by the community for the new building in a few short weeks.  Edward Drummond Libbey served as the Museum’s president from 1901 to 1925, funded building construction, and bequeathed to the Museum his personal collection of art.

When Edward Drummond Libbey died of pneumonia on November 13, 1925 at the age of 71, he left an endowment fund to the Toledo Museum of Art that continues to fund both operations and the purchase of works of art. His collaboration with Michael Owens would lead to the invention of the automatic bottle machine as well as new methods for producing flat glass.   From his company, the Libbey Glass Company, all of Toledo’s glass companies grew.  This includes the Toledo Glass Company, the Owens Bottle Machine Company, and the Libbey-Owens Sheet Glass Company. 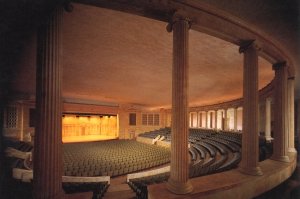 Florence Scott Libbey, your friends observed long ago that Mr. Libbey’s ideal of a museum was fostered by beauty in a home where your taste guided his interest in the highest expressions of art and they realize that the museum is the embodiment also of your vision and generosity. Praise and gratitude are but weak acknowledgments of a gift that blesses an entire city.

~ Tribute to Florence Scott Libbey presented at the opening concert of the Peristyle, January 10, 1933

After the death of her husband, Florence Scott Libbey gave up her life interest in their fortune to fund a major expansion to the Museum in order to keep 2,500 talented craftsmen working in Toledo during the Great Depression.  Part of this expansion was the creation of a grand concert hall known as The Peristyle.  She died in 1938, leaving the majority of her estate to the Museum ensuring what they started in 1901 would continue for future generations. Half of the interest from the endowment is dedicated to the purchase of art, with the remainder used to support ongoing operations.  Without the philanthropy and leadership of the Libbeys, Toledo would be a far different city and would not have such a beautiful art museum.

To the Memory of the past, to an understanding of the needs and conditions of the present, and to the future of increasing understanding.